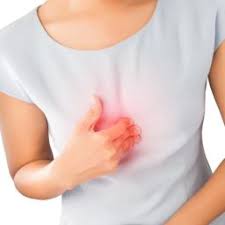 CAUSES: It is common in people of all ages. It occurs when the sphincter at the bottom of the esophagus becomes weak, or opens when it shouldn’t.

It is commonly seen in over weight and obese people due to increase abdominal pressure.

It is seen in pregnant females. Certain kind of medicines like antihistamines, antidepressants, sedatives, calcium etc also causes gerd. Smoking is one of the major cause of GERD amongst the smokers. Drinking certain beverages, such as alcohol or coffee causes GERD. Eating large meals or eating late at night, Eating certain foods (triggers) such as fatty or fried foods also cause GERD.

Heartburn is the most common symptom of GERD. It is a discomfort felt behind the breastbone that takes the form of a burning sensation. It gets worse if the person lies down or bends over, and also after eating food it gets worse. Its other symptoms are nausea or vomiting, bad breath, respiratory problems, difficulty while swallowing food.

Esophagitis – inflammation of the esophagus.

Barrett’s esophagus – the cells lining the esophagus change into cells similar to the lining of the intestine. This can develop into cancer.

Respiratory problems – it is possible to breathe stomach acid into the lungs, which can cause a range of problems including chest congestion, hoarseness, asthma, laryngitis, and pneumonia.

Phosphorus: it is suitable to persons who craves cold food and icy- cold drinks, refreshing, juicy things, ice-cream relives the gastric pain. Great burning in stomach which is better by cold food and drink, but as soon as water becomes warm in stomach, it is thrown up in the form of vomiting.

Robinia: There is acidity with frontal headache. Intensely acrid eructation with nausea, profuse vomiting of an intensely sour fluid. Acrid and greenish vomiting, colicky pain in abdomen. There is flatulence, burning pain in stomach during night and constipation with urgent desire. Flatulent colic.

Lycopodium: There is excessive accumulation of gas and flatulence especially in the lower abdomen with loud grumbling and croaking, rolling of flatus as though fermentations were going on, but not relieved by passing flatus and eructation.

Nat. phos: Ailments with excess of acidity, Sour eructations and taste. Sour vomiting. Yellow creamy coating at the back of the roof of the mouth and tongue. Flatulence with sour rising.

Nux vomica: it is indicated to persons of high living. There is acidity by taking coffee, tobacco, alcohol, quinine, highly spiced food, irregular diet, overeating, sexual excess, by long continued mental exertion, having sedentary habits, who want to do exercise, from loss of sleep.

Iris and ars alb are also indicated if symptoms agree.