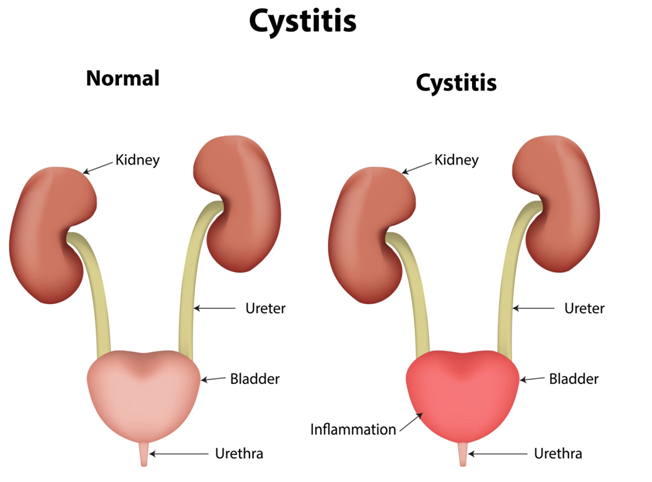 Cystitis is the term used for inflammation of the bladder. Most of the time, the inflammation is caused by a bacterial infection, and it’s called a urinary tract infection (UTI). It can become a serious health problem if the infection spreads to your kidneys. It may occur as a reaction to certain drugs, radiation therapy or potential irritants, such as feminine hygiene spray, spermicidal jellies or long-term use of a catheter. Cystitis may also occur as a complication of another illness. A strong, persistent urge to urinate,  burning sensation when urinating, passing frequent, small amounts of urine, blood in the urine (hematuria), passing cloudy or strong-smelling urine, discomfort in the pelvic area, feeling of pressure in the lower abdomen, low-grade fever are few common symptoms of cystitis. In young children, new episodes of accidental daytime wetting also may be a sign of a urinary tract infection (UTI). Nighttime bed-wetting on its own isn’t likely to be associated with a UTI. Women are more prone to develop bladder infection or recurrent UTI as females have a shorter urethra than men, which cuts down on the distance bacteria must travel to reach the bladder.

Women at greatest risk of UTIs include those who are sexually active, those who use certain types of contraceptives or those who are pregnant. In men without any predisposing health issues, cystitis is rare.