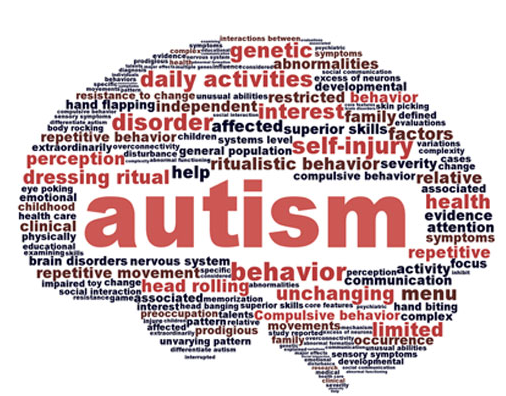 What is autism? It is a serious neuro developmental disorder that impairs the ability to communicate and interact. ASD refers to a range of conditions characterized by challenges with social skills, restricted and repetitive behaviors, speech and nonverbal communication, as well as by unique strengths and differences. These signs often develop gradually. However,  autistic kids reach their developmental milestones at a normal pace and then regress. Symptoms become apparent in early childhood, typically before age three. Some parents may even notice  signs in first 2 years of child’s life. Autism can be of many types, caused by different combinations of genetic and environmental influences. However, some cases are found affected due to infections during pregnancy; while few are reported may be due to bad effects of vaccination. However vaccine hypothesis is not proven. “spectrum” reflects various challenges and strengths possessed by each person with autism/ASD. ASD has impact on  the nervous system and affects the overall cognitive, emotional, social and physical health of the affected individual. Autism affects information processing in the brain by altering how nerve cells and their synapses connect and organize; how this occurs is not well understood.

There is wide variation in range and severity of symptoms . Common symptoms include difficulty with communication, difficulty with social interactions, obsessive interests and repetitive behaviours.

Early recognition of symptoms, as well as behavioural, educational and family therapies may reduce symptoms and support development and learning. Autism is treatable. Children do not “outgrow” autism.Early intervention and to seek evaluation of child without delay helps in improving condition.

Homoeopathic medicines   can help treat kids with ASD or autism. Homoeopathic medicines are of great help to such kids. There are certain factors which are directly related to improvement in such kids like less the age more chances towards betterment. Along with behavioural and various other  therapies it is essential for parents to involve with the child. If both the parents are working it may act as a contributing factor towards the disease as no such love affection and care is provided by nannies which a mother can provide. Never left child alone; try to involve with child. Don’t let kids over watching of television or using of other gadjets like tabs mobile phones etc; as it is seen that it hampers child’s ability to learn and understand.

Don’t send such kids to schools or playway or crèches as there are high chances of neglection; as child get neglected in more kids and he get more chances to dwell in his own world. Therefore it is always advisable that family members should look after their kid instead of sending them to normal school.

Homeopathic medicines are of great help to kids those who show above mentioned symptoms. But be cautious homeopathic medicines have to be given only under the able guidance of homeopathic physician. I will not mention here any specific remedy for autism or autism spectrum disorder as best suited medicine can only be arrived at after a complete case taking and I have a strong belief that in such cases totality of symptoms and approach towards individualization is essential.